Notes is a web application for storing your encrypted notes in the cloud. It takes a different approach from Laverna which stores your notes locally without encryption. Notes, however, works like Evernote on principle. 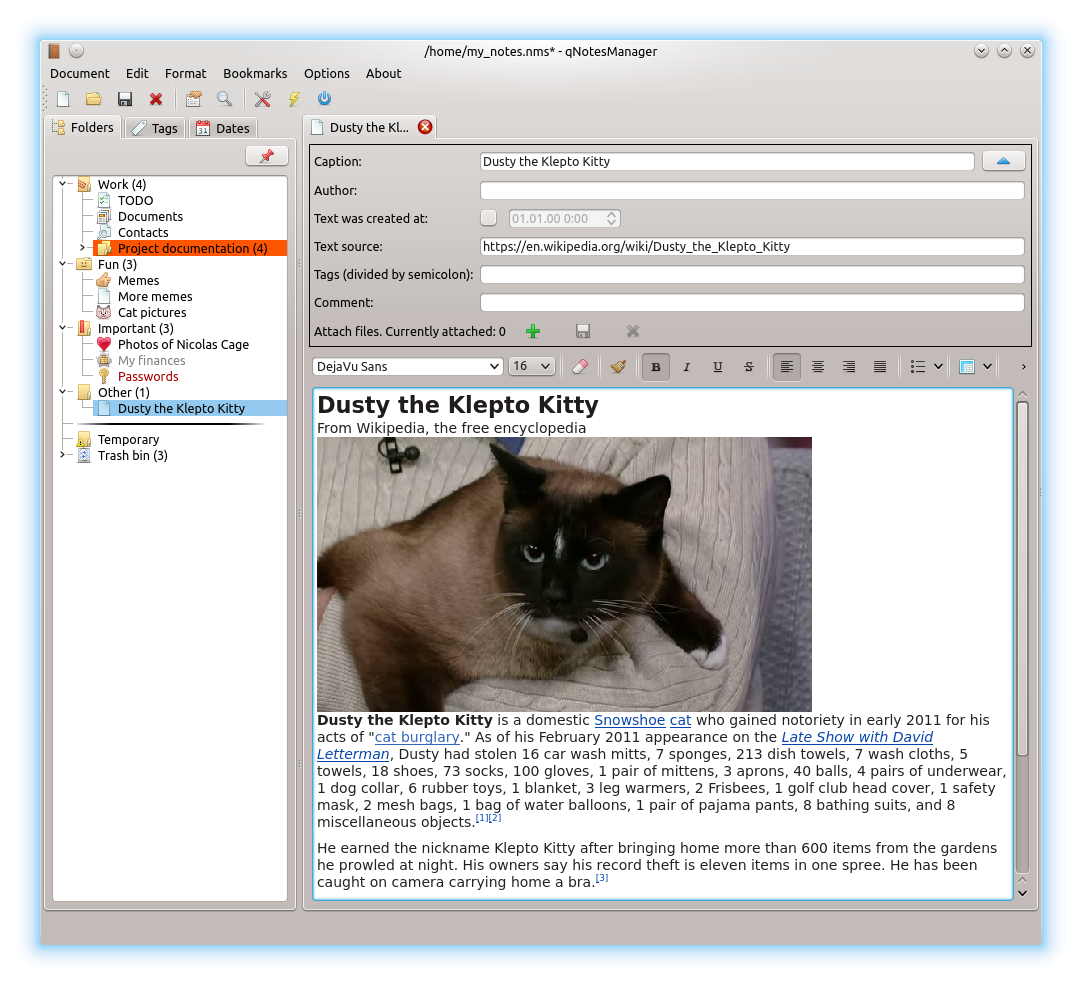 We explored many note managers in earlier articles. There are several quality applications like Cherrytree, Springseed, Laverna or purely console based note managers. There’s even Notepadqq, a Notepad++ clone. However, this is a category where new members keep coming on.

qNotesManager is not distributed as a package yet. It needs to be compiled from source. The dependencies are:

To compile it on Ubuntu:

Off late I prefer using GitHub Gist for my notes. For confidential or temporary stuff that I do not want to store on a server I use note or Laverna. However, I have friends and colleagues who use Evernote all the time. Evernote doesn’t have a official client for Linux. Here’s an unofficial one which is light and gives you the freedom to use your favourite text editor on Linux.

Geeknote is a console based Evernote client written in python. It supports the following:

Geeknote provides a number of easy to remember cmdline options. Check the documentation for a step by step guide on usage.

To install and launch Geeknote:

If you stick to the terminal most of your time, you might like a console-based utility to save your notes. We explored console based note managers note and nodau in an earlier article. Memo falls in the same category. You can add short notes and manipulate them whenever you want. Here are some common use cases:

Memo is only suitable for quick casual notes because it does not have any integration with a text editor per se. So it’s difficult to maintain long notes with Memo. It doesn’t seem to support encryption either. Though there are some tips and options for conky integration and exporting to html that doesn’t help the fact that the app is just too simple and it’s easier to maintain a text file and edit it with vi rather that installing an additional software. However, this is the current stage and Memo is a very fresh app released last week… we can expect new features from the developer. As of now, Memo works well as a simple ToDo list manager.

You have to build Memo from source to use it. The dependencies are minimal. To compile and run it, download the source code and run the following commands:

Markdown and Wiki-style editors are quite popular among web-authors. We wrote about web-based versatile editors like Laverna earlier. This article covers two more fantastic editors for the writer in you. 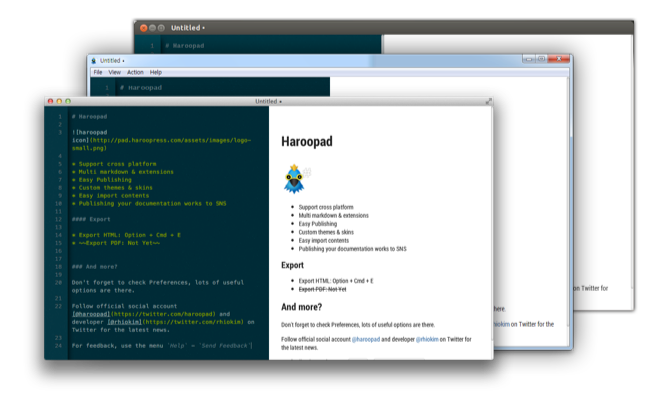 Not just another Markdown editor, Haroopad is tightly coupled with the cloud including smart media integration from 50+ online services. It’s still under heavy development and promises many features at the time of writing. Let’s take a quick look: Wiki-style document processor to link among your notes. Features:

Palm Note is a rich note manager with powerful features. It communicates with several web services in order to store or provide accurate information. It is easier to use on bigger screens and has a clean look and feel. Top features include:

The devs should revisit certain areas to turn this into a winner.

However, if the features still seem useful to you and you have a powerful processor on your smartphone or tablet, I would recommend trying it out. 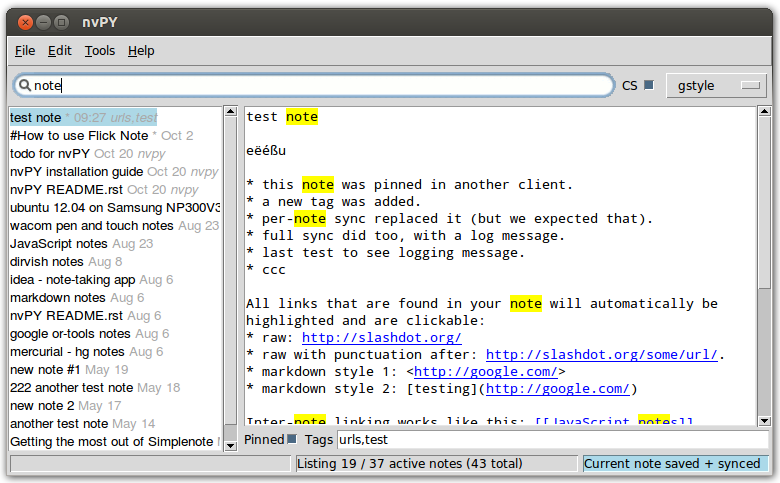 Simplenote user looking for a client on Linux? You’re in luck! nvPY is an unofficial Simplenote client for Linux.

To install on Ubuntu,

or, for the latest version

To setup nvPY, create a file called .nvpy.cfg in your home directory and add the following: 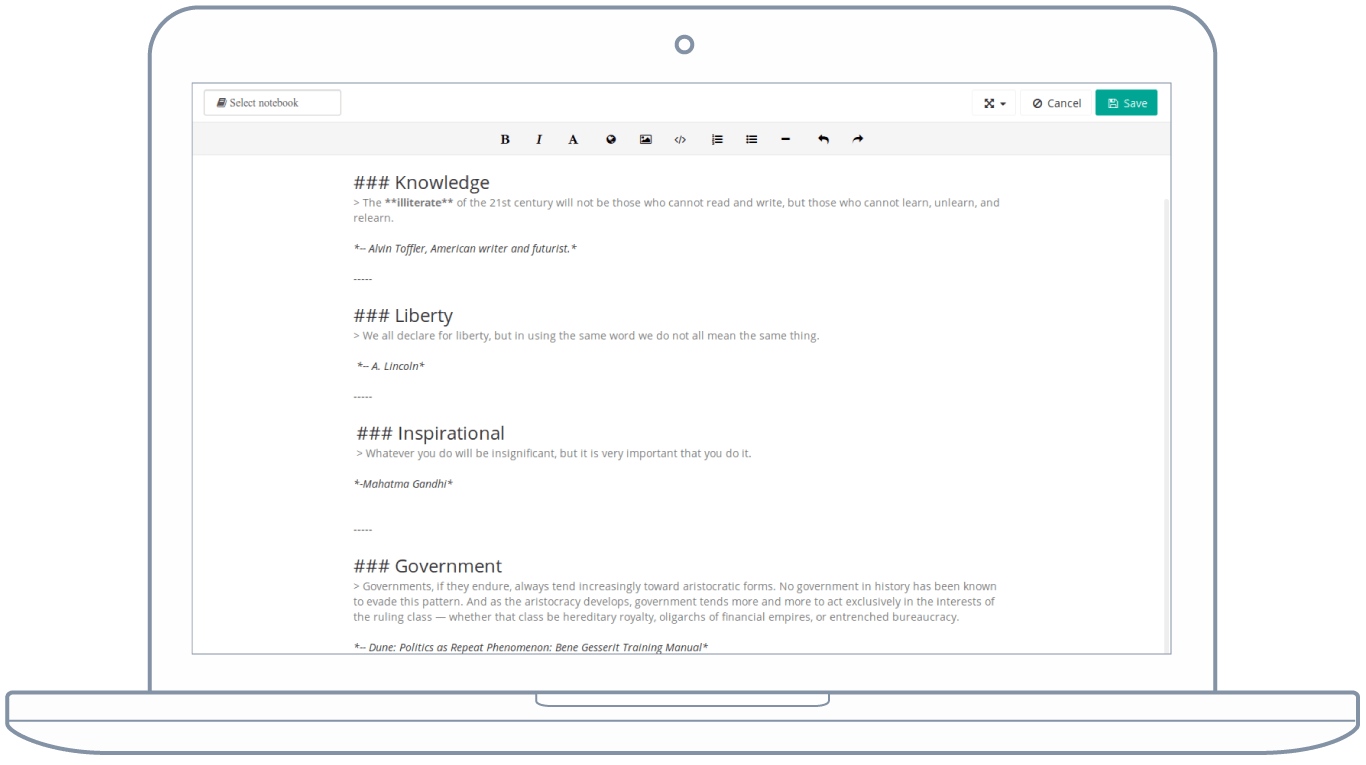 We wrote about Nitro and Springseed earlier. Both of these native apps are good alternatives to Evernote on Linux as they can integrate with Dropbox. And then we have Nevernote (aka NixNote) – the multiplatform (JAVA based) open source client designed to work with Evernote. Recently we came across another open source project which is a very capable alternative to Evernote.

Laverna is written in Javscript and can run online in your browser or can be installed locally. Use markdown text to create beautiful notes with Laverna. I drafted this article in Laverna.

Laverna has native desktop clients too. GloboLinux is a slick looking powerful app to handle all your notes. In addition to being a note manager, it is also a sticky notes app with rich text editing capabilities. It lets you attach files and images to the notes. The only drawback I find is that it is written in JAVA but given the number of features t has, I guess people with JAVA already installed defnitely check it out. Features at a glance:

As the app is written in JAVA, it is platform independent and installation is trivial if you have JAVA.

All of us keep notes. In my case I like to keep them organized and I use note managers for that. Though I have initially used graphical note managers cherrytree, springseed etc. because of the visual editing features they provide, I realized at one point that I do not need so many bells and whistles. Many of these tools are bulky, some of them are slow starters and most of them provide more options than you want to handle. So I fell back to console based note managers. Here are some of those I like and find very easy to use and simple to understand. They just manage a number of notes and provide you options to edit them in your favourite editor.

My favourite is note.